John Maher, former drummer with Manchester punk band Buzzcocks, moved to the Isle of Harris in 2002. For the past six years he’s been photographing abandoned croft houses. His work has led to a joint venture between the Carnegie Trust and the local housing body to renovate some of the derelict properties scattered across the Outer Hebrides, securing a donation of £50,000 from the William Grant foundation to launch the project. John looks forward to the day one of these currently derelict houses becomes a home once again and being there to capture the event on camera. 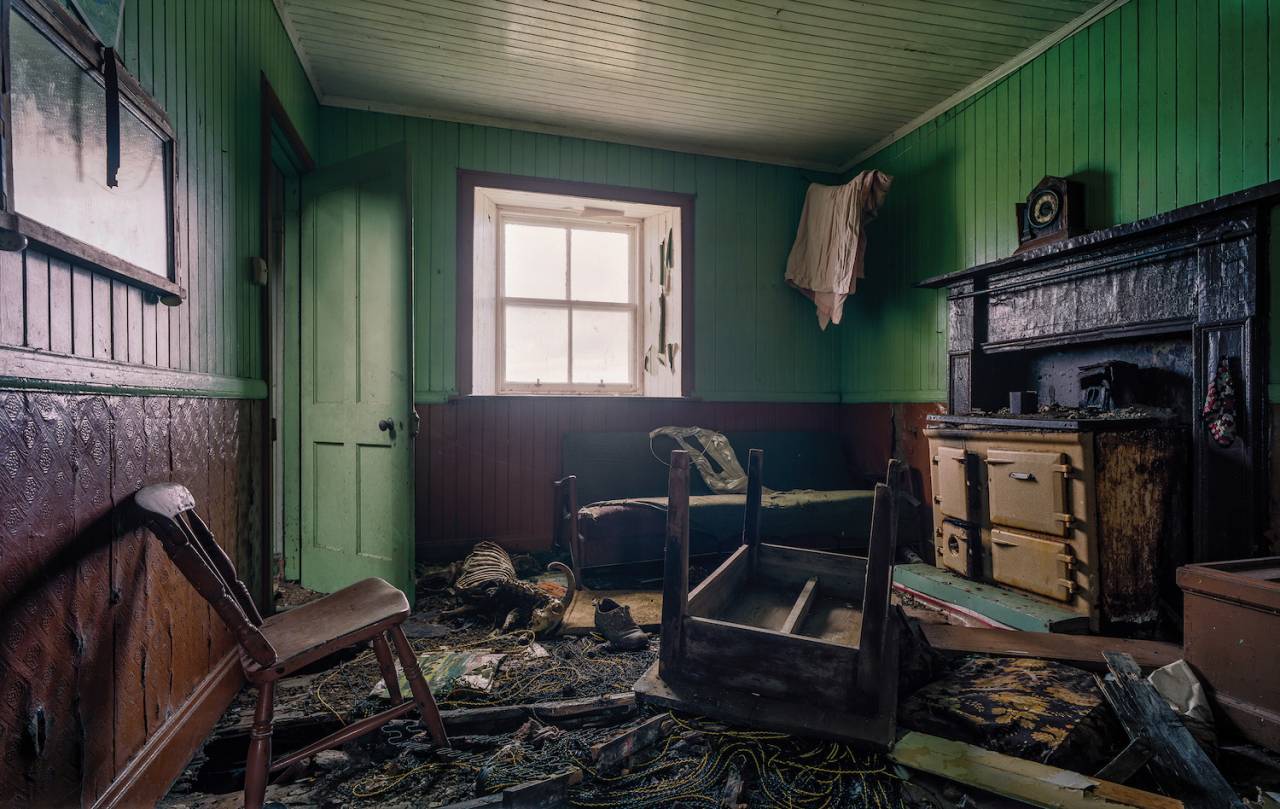 GREEN ROOM
A sheep lies on top of 12″ vinyl records. One year after this photo was taken, the roof collpased, burying everything you see under timbers and roof slates. 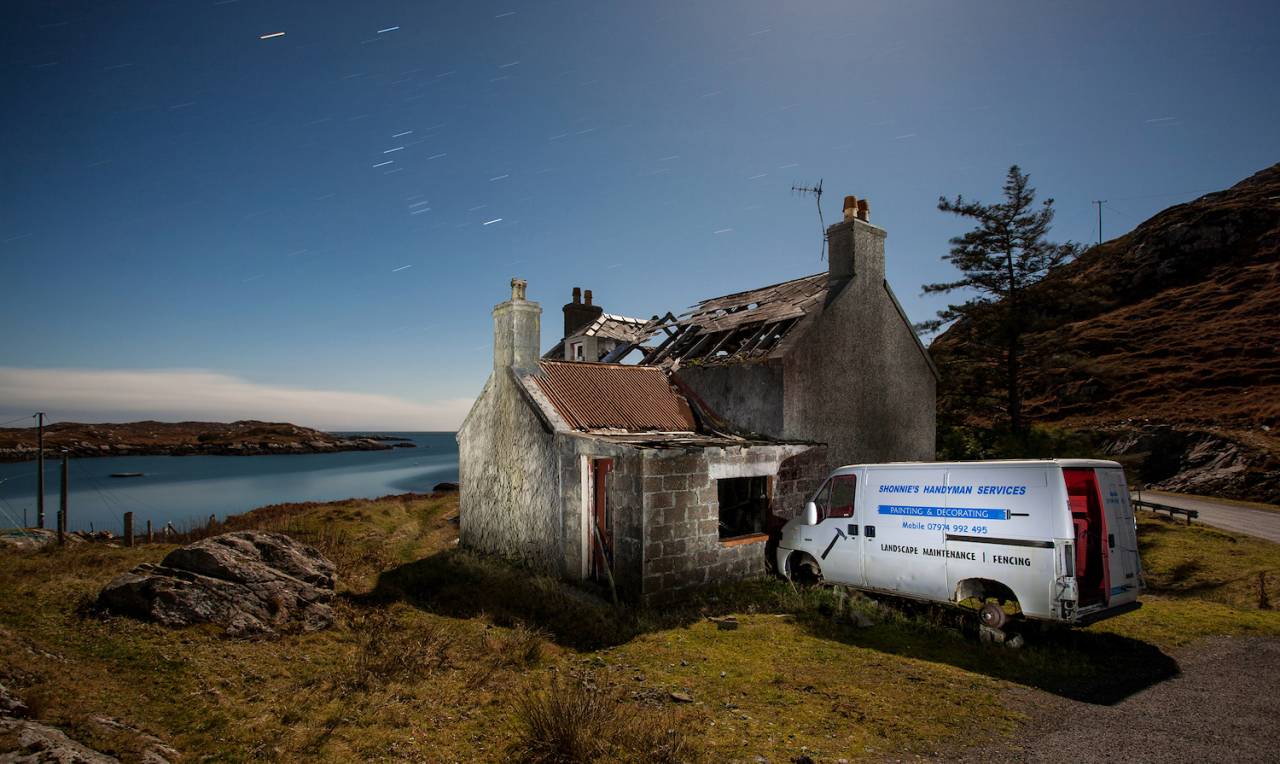 NO JOB TOO SMALL
Six minute exposure under the light of a full moon. John says the lack of light pollution is a major factor in many of his night photos. 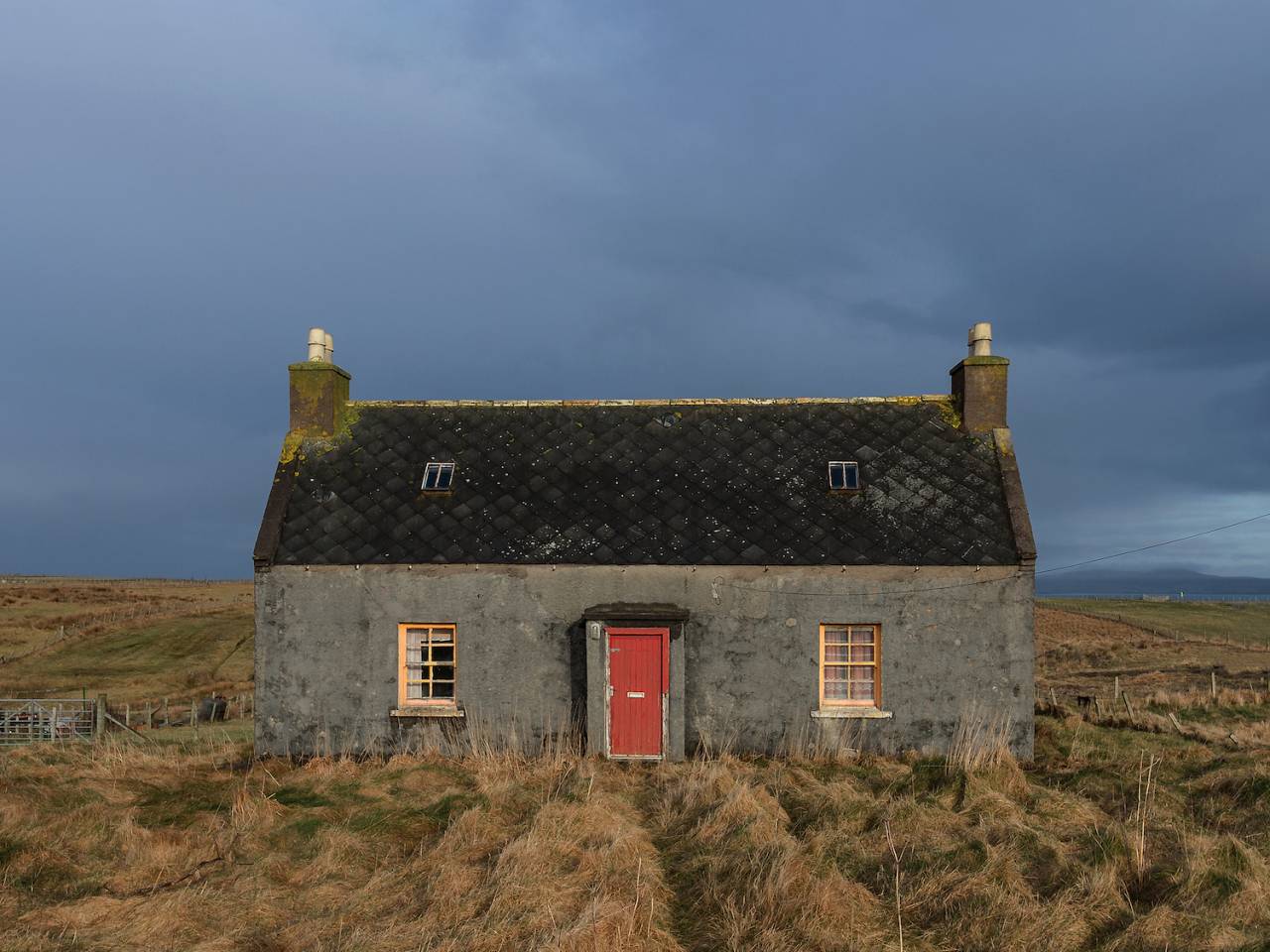 NOBODY’S HOME
The symmetry of this house on the Isle of Lewis reminds me of the houses I used to paint and draw at primary school. 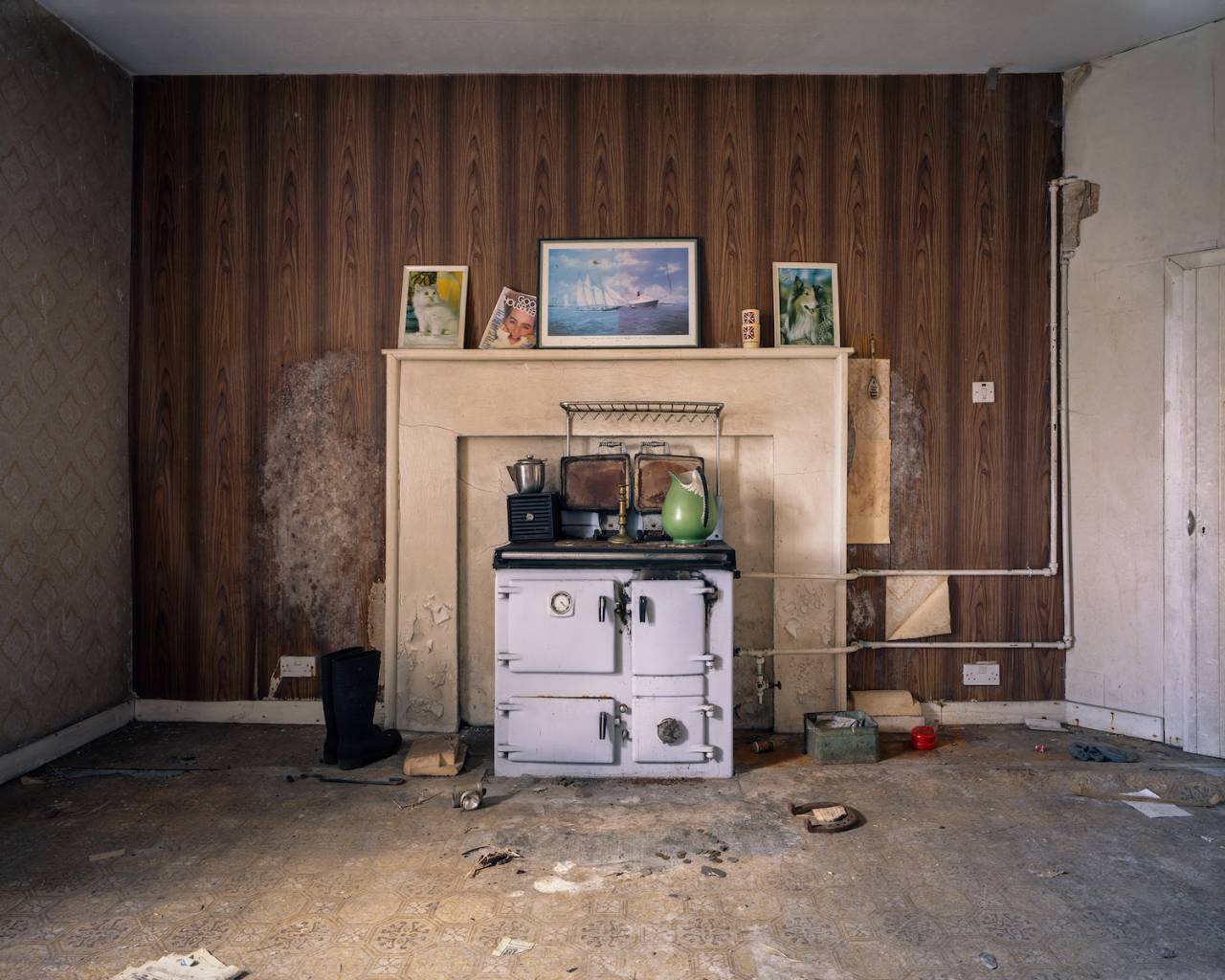 THE DOG, THE CAT & THE BIRD
Plastic framed cat and dog portraits are accompanied by the skeleton of small bird on the floor. The two mugs on the mantelpiece commemorate the 1974 Commonwealth Games in New Zealand. 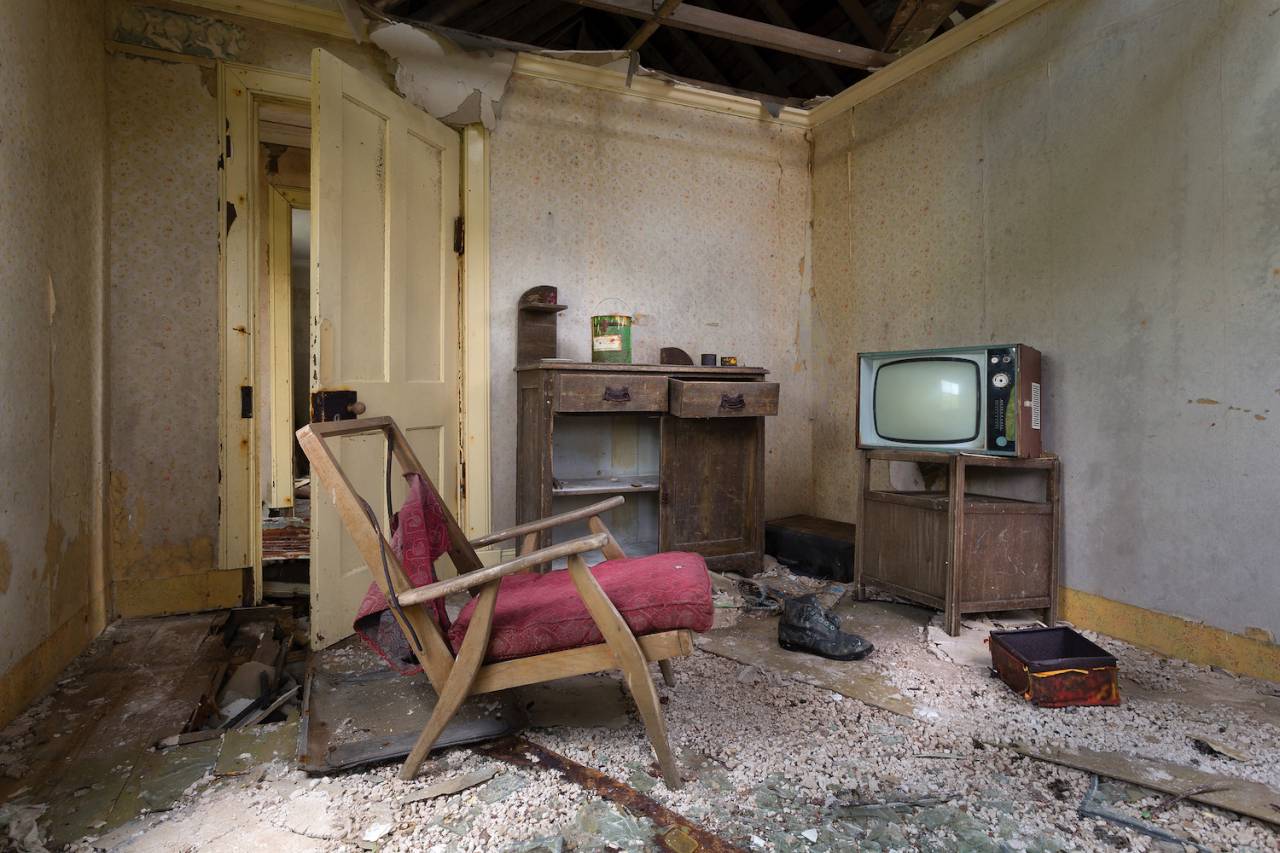 TV SET
The screen of an old black and white television has survived intact while the walls and ceilings crumble around it. 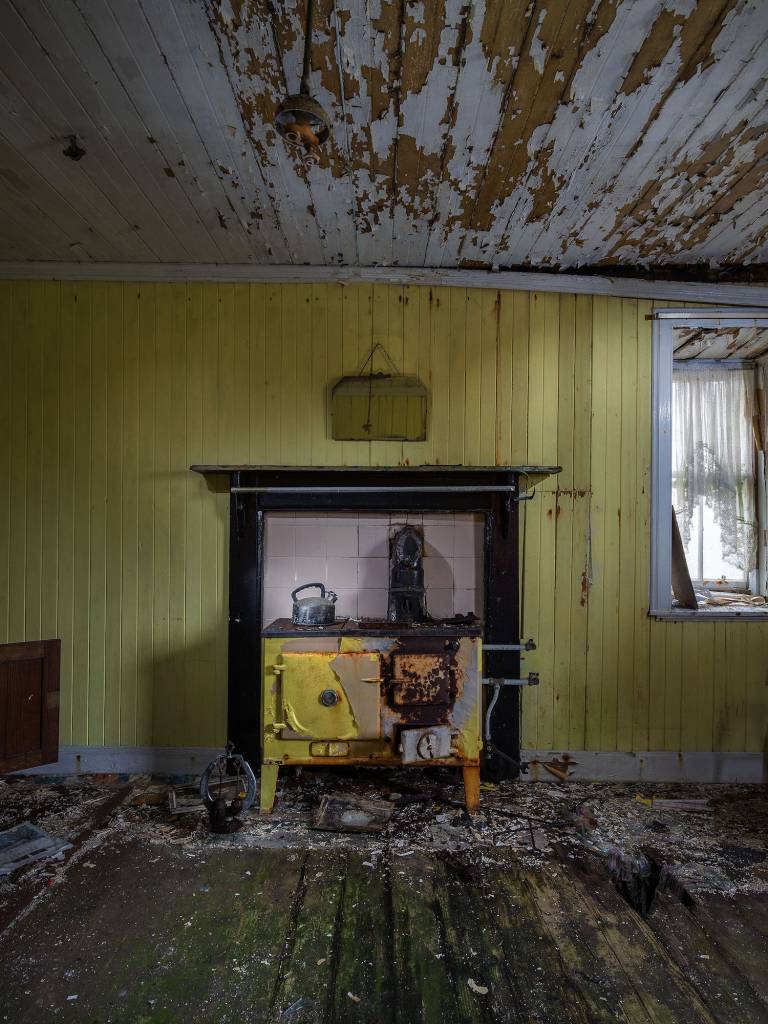 PARALLEL LINES
One of the first houses I entered, discovering many personal items had been left behind by the former occupants. I was also surprised to see the brightly coloured the interior. A stark contrast to the often drab exteriors. 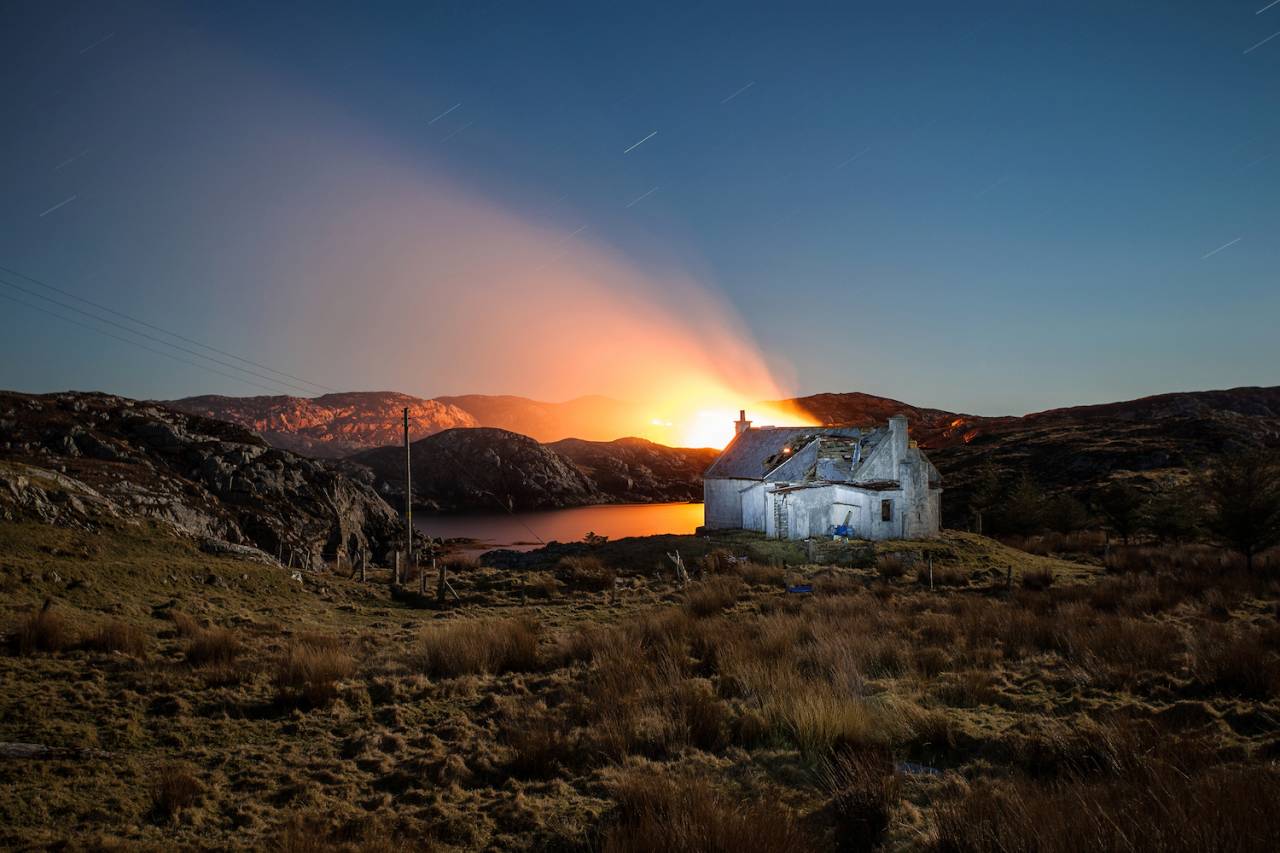 PEAT FIRE
This dramatic image was captured one night in March 2013, on the east coast of Harris. Muir-burning is an annual practice carried out by many of the islands crofters, usually between early March and mid-April. It burns off rough hill grasses and long mature heather to improve grazing for their sheep. 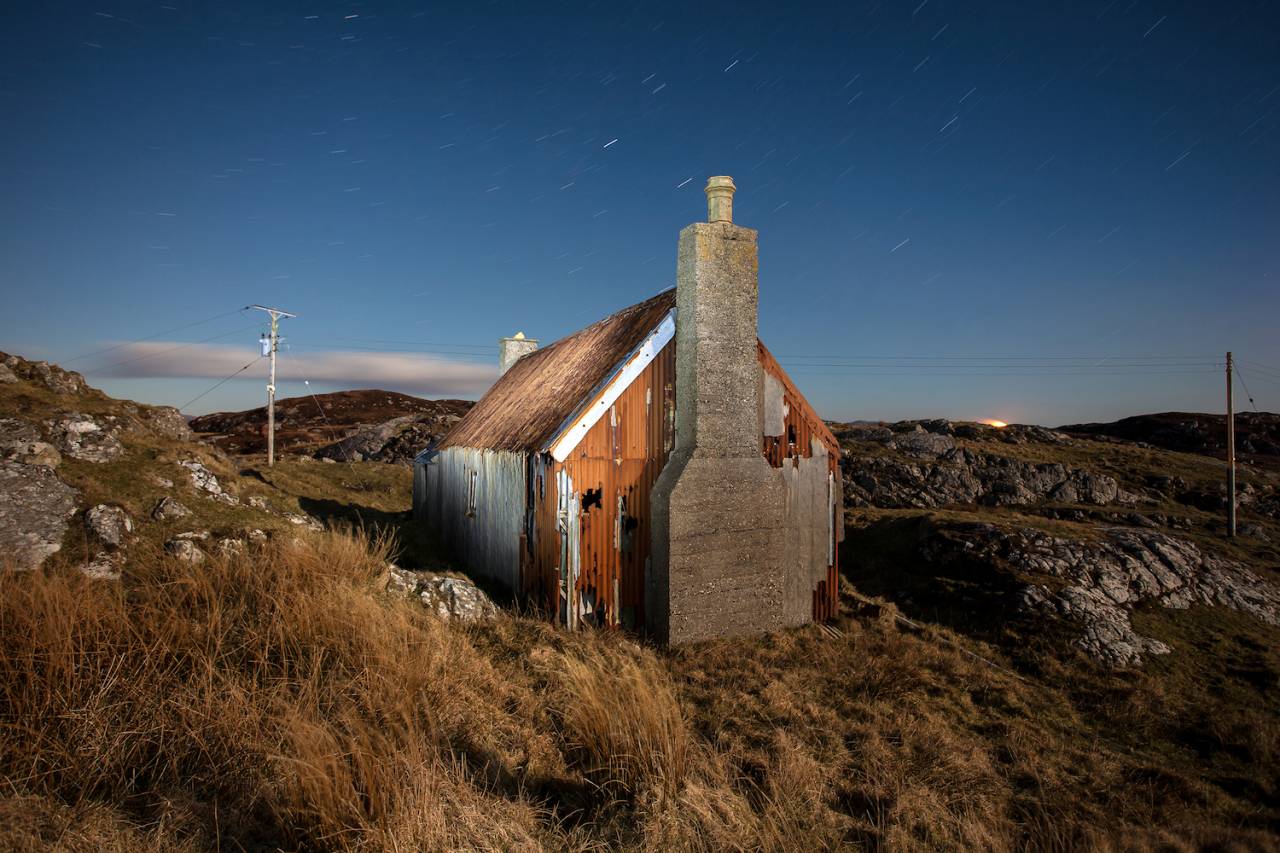 TIN AND STONE
Tin walls and roof. Taken on the same night as the ‘Peat Fire’ shot above. The glow of burning peat can be seen over the hill on the right. 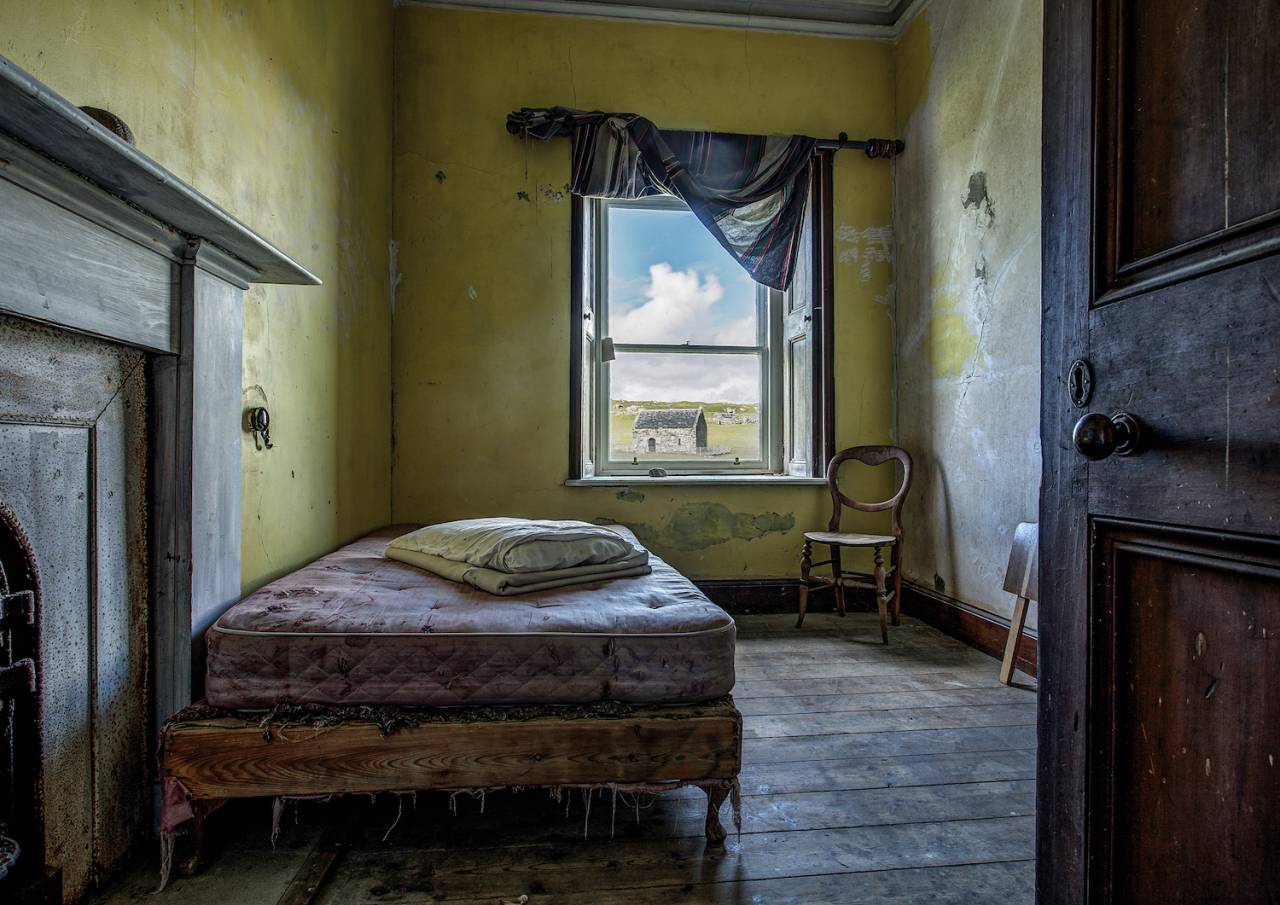 BEDROOM & CHAPEL
The only house on the now uninhabited island of Ensay. Looking across to Ensay Chapel from one of the upstairs bedrooms. 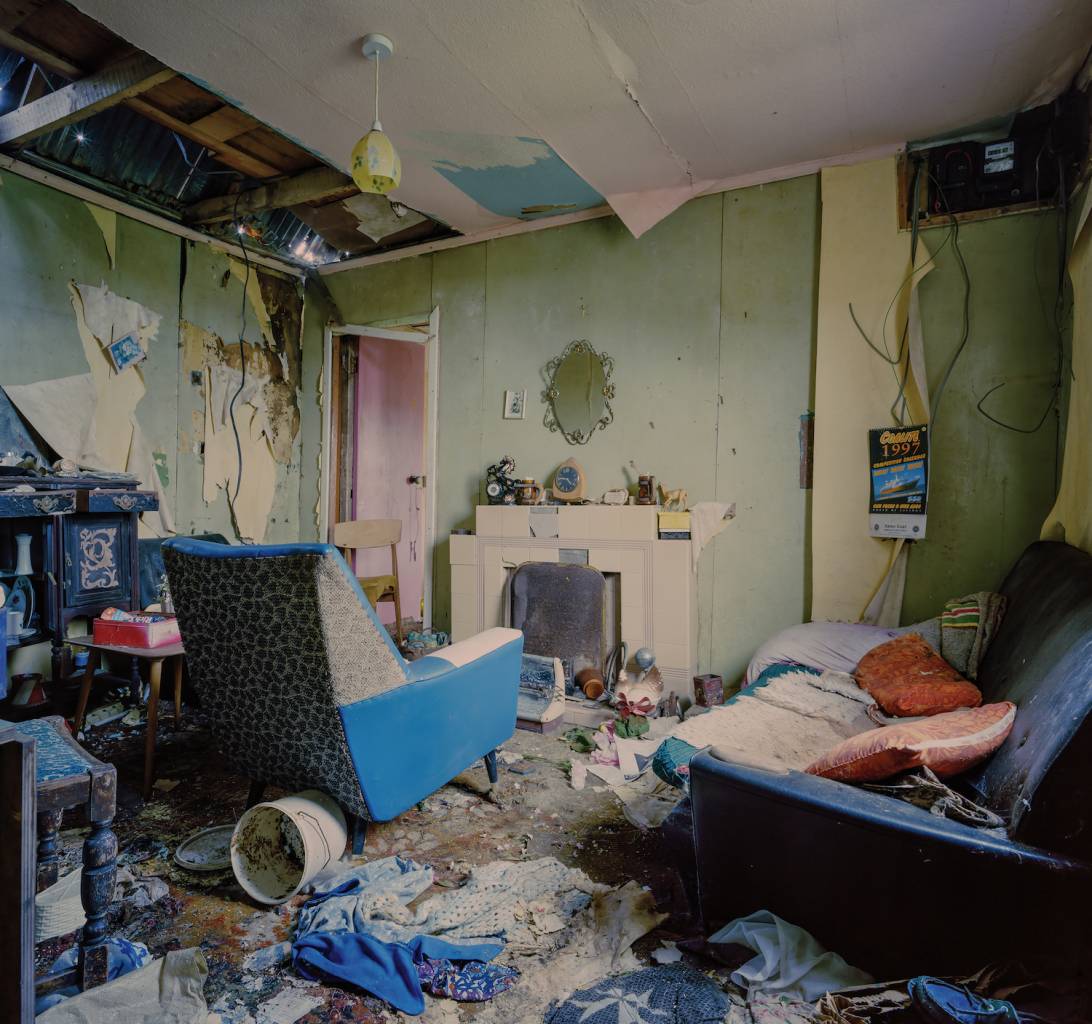 BLUE CHAIR
Last occupied in the 1990s. Like most of the houses John photographs, this one still contains many of the personal belongings of its former occupants. 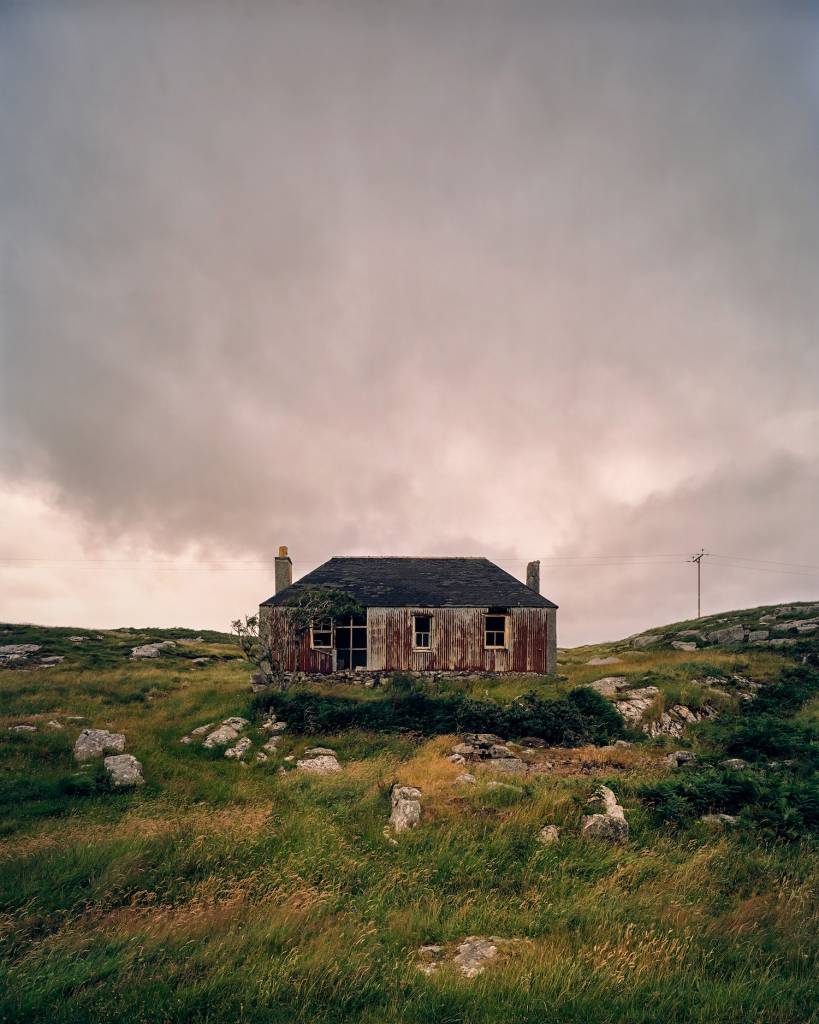 RUST IN PEACE
One of the simplest, and least expensive, forms of construction. The gable ends are made from stone blocks, while the front and rear walls are corrugated tin. This house is still standing on the Isle of Scalpay. 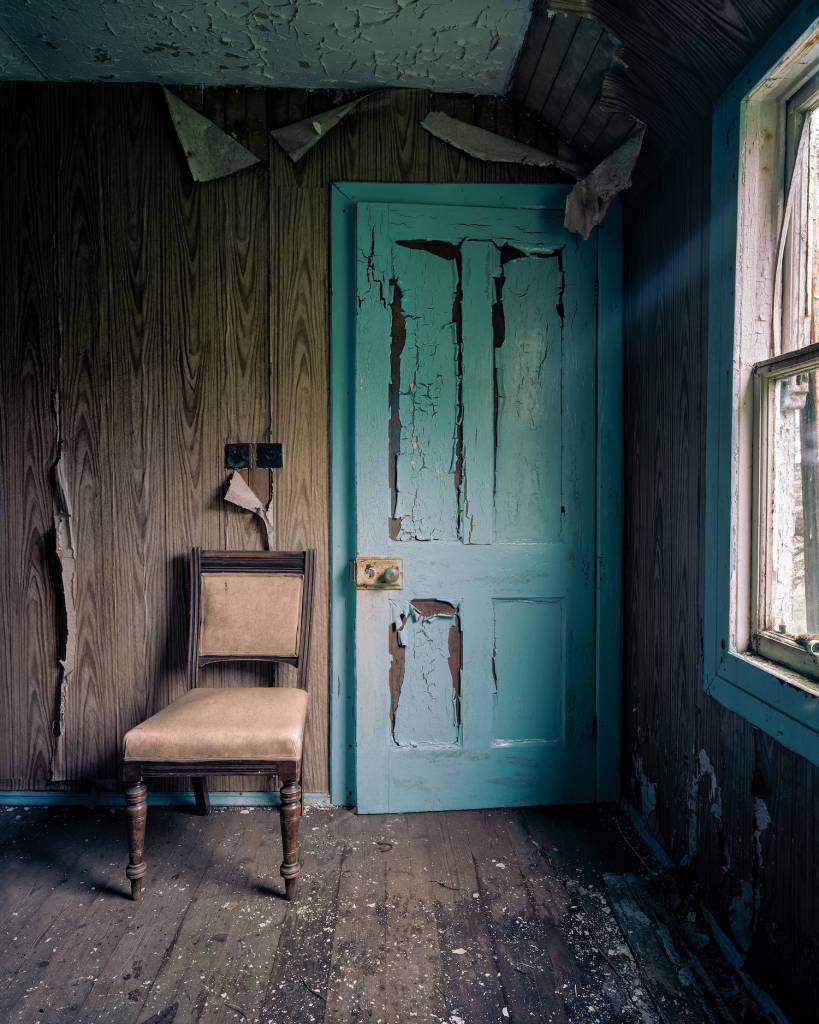 WAITING ROOM
John uses a mix of digital and film cameras to make his photographs. This was shot on a 1960s large format film camera. Wood effect wallpaper peeling away reveals the real thing underneath.

Every Page A Wonder: A Sublime Victorian Scrapbook